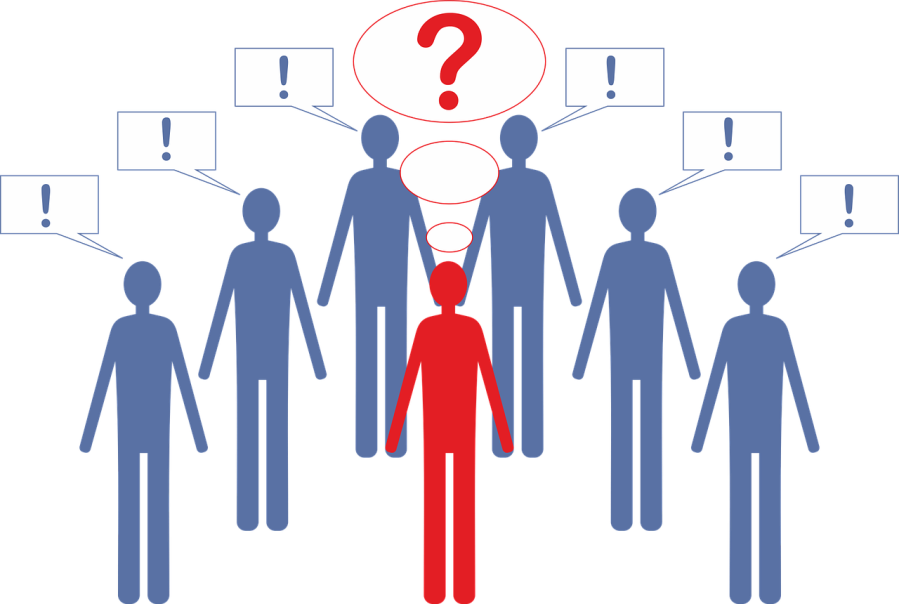 “If he’s fat, he’s a glutton.” “Anyone with that accent is uneducated.” “As a woman, she’s a push over.” Prejudice can target anyone different than us and includes stereotypes of women, men, the rich, the poor, the LGBTQ community, ethnicity, bikers, conservatives, liberals and anyone that comes to mind when asked “who do you consider lesser, avoid or fear?”

The Parable of the Pharisee and the Tax Collector

To some who were confident of their own righteousness and looked down on everyone else, Jesus told this parable: “Two men went up to the temple to pray, one a Pharisee and the other a tax collector.  The Pharisee stood by himself and prayed: ‘God, I thank you that I am not like other people—robbers, evildoers, adulterers—or even like this tax collector. I fast twice a week and give a tenth of all I get.’

“But the tax collector stood at a distance. He would not even look up to heaven, but beat his breast and said, ‘God, have mercy on me, a sinner.’

Why a tax collector? Because they were despised by the Jewish population, which was who Jesus was talking to.  Yet this man humbly recognized himself as a sinner and sought God’s mercy and Jesus declared him exalted and justified.

We don’t have to look far to find our “tax collectors” of today: people who are part of a group despised by someone, people who don’t get the credit they deserve.  We make assumptions about individuals without knowing their heart or mind or their situation.  Whereas Jesus may declare them justified before God.  How do we develop such strong feelings about people we don’t know?

The Development of Social Categories

All people have a need to make sense of the world and we do that from infancy and across our lifetimes by creating categories to help interpret our environment. We create constructs like “fruit” and “vegetable” to categorize types of food. We create constructs about gender, age and other attributes of people.

Most of our constructs are based upon our socialization and the concepts we learn from the people around us, as well as our exposure to books and media. No one is born prejudiced, but as we are exposed to others’ biases, inaccuracies, and stereotypes, we develop beliefs that are discriminatory. Let’s admit it – It is nearly impossible to grow up without some.

Confirmation of Our Biases

Once constructs have been formed, we have a natural tendency to selectively attend to information that agrees with or confirms our existing categorizations. So, biases such as Asian men are good at math and science, black men are good at basketball, or white men are entitled and insensitive to others are reinforced as we selectively attend to any information that reinforces our existing biases. We then have well-entrenched stereotypes that can guide our actions.

Once a stereotype is entrenched, it can become unconscious and automatic. We find ourselves just reacting without stopping to think. We may believe that we are truly not prejudiced or racist, while not consciously aware of our automatic thoughts and attitudes. There are generally two parts to this:

The Escalation of Prejudice

Initially, if a person feels insecure or lacking in identity, they may have a desire to affiliate themselves with a group in order to strengthen their sense of self and find a feeling of belonging.  Being part of something bigger than themselves and sharing a common cause with the other members of their group makes them feel more complete and significant.

There is nothing wrong with this in and of itself.  However, this group identity may lead to a second stage. In order to further strengthen their sense of significance, members of a group may develop hostile feelings toward other groups.  Here we begin to judge others whom we don’t even know.

The third aspect is when members of a group take the step of withdrawing empathy from members of other groups, limiting their concern and compassion to their fellows.  For example, as political tensions polarize us, we become unquestioningly zealous about our party affiliation and feel momentarily justified not empathizing with members of the opposing party – we dismiss them as other.

This is closely related to a fourth aspect, in which individuals belonging to other groups are no longer perceived in terms of their individual personalities or behavior, but in terms of generalized prejudices and assumptions about the group as a whole.

And finally — moving into the most dangerous and destructive extreme of prejudice — people may project their own psychological flaws and their own personal failings onto another group, as a strategy of avoiding responsibility and blame. Other groups become scapegoats, and consequently can justifiably be attacked or murdered, in revenge for their alleged crimes. Individuals with strong narcissistic and paranoid personality traits are especially prone to this strategy, since they are unable to admit to any personal faults, and are especially likely to demonize others.

Changing our individual unjust social concepts takes conscious effort and practice. Dr Sherry Benton has 3 suggestions on how to do this:

The Good Samaritan parable is an excellent reminder of how we should act toward others. I you’re wondering who merits such compassion from us, you may find an answer in this article entitled “Who are Your Neighbors?“

Therefore, judge nothing before the appointed time; wait until the Lord comes. He will bring to light what is hidden in darkness and will expose the motives of the heart. At that time each will receive their praise from God. (1 Cor 4:5)

Then Peter began to speak: “I now realize how true it is that God does not show favoritism but accepts from every nation the one who fears him and does what is right. (Act 10:34-35)

My brothers and sisters, believers in our glorious Lord Jesus Christ must not show favoritism. (James 2:1)

“The Psychology of Racism; Racism is a sign of a lack of psychological maturity and integration.” by Steve Taylor Ph.D.

“A Surprising Cause of Prejudice; The real problem might be how we relate to people like us”  by Ron B. Aviram, Ph.D.

“Understanding Prejudice, Stereotypes, and Racism; Why we develop social constructs—and how we identify and change them.” by Sherry Benton Ph.D.

Searching for the Way

Thoughts from a Disciples of Christ Reverend