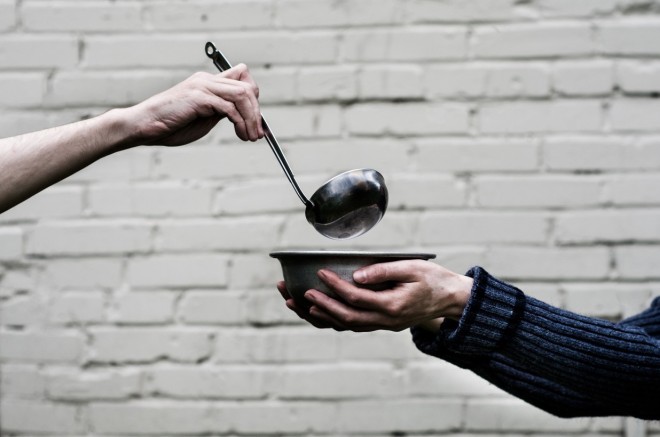 The Bible reminds us that kindness counts above all else. This is the mark of our humanity—kindness to the poor, to the sick, to the homeless, to the AIDS victim, to the dying. Kindness is our core prophetic witness and stands against our imperfection.

Jesus’ solidarity with the “the least of these” plants him among the prophets (Matthew 25: 40). Jeremiah and Isaiah say the measure of a society is how it treats its least powerful. Jesus entered into commonality with the poor, oppressed and suffering.

The revolutionary nature of Jesus’ witnesses is lost on most Christians today. It’s scandal is misunderstood and misrepresented.  But authentic Christianity continues to enter into the fray of poverty and affliction. This is Christianity’s legacy—to show God’s love through service to “the least of these.”

From Mother Teresa’s Sisters of Charity to Millard Fuller’s Habitat for Humanity, reaching out to the poor is still the fast ticket to the heart of the gospel. Charitable acts cut to the core of social problems. They are rare because isolated acts in solidarity with the poor seem hopelessly insignificant.  At one point Gandhi said “serving the poor can feel like trying to empty the ocean with a bucket. Nevertheless, it’s crucial that we continue.”

Dom Helder Camera, former Archbishop of Recife, Brazil, remarked, “I give people bread and they call me a saint. I ask them why the poor don’t have any bread and they call me a revolutionary.” As in Jesus’ time, solidarity with the poor is always dangerous.  it asks the charged political and economic questions and threatens the lopsided status quo.

“Jesus, being in very nature God, did not consider equality with God something to be used to his own advantage; rather, he made himself nothing, by taking the very nature of a servant” (Philippians 2: 6 – 7). Christian author, Henry Nowen, popularized this gospel concept with the phrase “downward mobility.” We’re called to the same downward mobility, from whatever privilege we enjoy, to solidarity with the least of these.

Mother Teresa’s daily question to her Sisters of Charity was, “have you seen Jesus today?” in a PBS documentary on Mother Teresa, a sister relayed when she finally saw Jesus. She was bathing the wounds of one of the poorest of Calcutta’s street urchins, then she met Jesus eyes—the heart of Christ, which shatters all words and leaves them as dust. The sister was enchanted by the Heart of the world looking back at her, disguised in the form of a hapless stranger. The nun experienced transpersonal mystical awareness, which sees Christ in another person (Matthew 25: 40).

Eastern Orthodox writers like Florovsky (d. 1979) and Kireevsky (d. 1856) asserted that truth isn’t attained by the isolated individual relying solely on reason but can be discovered primarily through shared experience and communion. According to these authors, “the knowledge of the truth is given through mutual love.” Communing with others taps into our common humanity. Submission to relationships and their invisible lines of connection transforms us.

In Jesus time everyone had a profound aversion to lepers. Nobody wanted to get anywhere near them. That’s why lepers were banished to the outer limits of the cities.  If a leper came near, everyone turned and went the opposite direction at best, or picked up stones and pelted the them at worst.

We naturally identify with successful, beautiful people who seemingly have their stuff together. We side with authority figures, even when their motives and actions are questionable. On the other hand, we tend to dismiss people labeled convict, Klansmen, derelict, or poverty stricken.

We can too easily take sides, assuming that the more disreputable people are at fault. Yet, often social status and reputation are just a facade. We jump to conclusions too easily. Sometimes the people we would least expect are the ones most guilty. Sometimes the people who are the least respected in the community have the most wisdom. Because, most often, public failure is followed by greater humility and honesty, which are the hallmarks of the Saints.

I think Jesus emphasized reaching out to the poor, because in doing so, we let go of our shallow social scripting, which blinds us to the humanity of the least of these. Our culture has an unspoken callousness towards poor, obese, and homely people. This is obvious from watching television, where the stars are almost always wealthy, thin, and beautiful.

The point is to probe continually behind appearances and check assumption at the door. The point is to observe and ask as many clarifying questions as possible, opening the doorway to understanding. Otherwise, we go through life with blinders on, never seeing the humanity beneath the appearances. This is the unassuming, high-minded, and unbiased posture Jesus exemplified. It’s as rare as it is healing.

Jesus said, “beware of the yeast of Herod (Mark 8: 15).”  What did Jesus mean by this? He meant to be wary of all systems of domination, especially those that disregard the least of these. Disregard for the poor and oppressed were the benchmarks of Herod Antipas’ (D. 40) rule. Like yeast, which raises the loaf of bread, the toxins of aloof oppression have a way of infecting entire nations with violence.

Jesus’ words are a wakeup call for us who were born into the middle and upper classes and into the privilege that followed. Jesus words move us from entitlement towards solidarity with the least of these. His words move us from the assumption that our middle-class experience is normative to understanding. Our’s is just one experience among many, with numerous blind spots.

May we attempt to “beware of the yeast of Herod.” May we see the poor! And may we exclaim in solidarity, “don’t walk behind me, I may not lead. Don’t walk in front of me. I may not follow. Walk beside me and be my friend.”

Further discussion of this topic can be found in:

Fusing Meditation and Activism for an Amazing You

Your Focus on Forgotten Spirits

“The King will reply, ‘Truly I tell you, whatever you did for one of the least of these brothers and sisters of mine, you did for me.’ (Matthew 25:40)

“Be careful,” Jesus warned them. “Watch out for the yeast of the Pharisees and that of Herod.” (Mark 8:15)

Who, being in very nature God,
did not consider equality with God something to be used to his own advantage;
rather, he made himself nothing
by taking the very nature of a servant, (Philippians 2:6-7)